It would be accurate to say that documentaries are among the most valuable, neglected cultural forms of our time. They aren't all good, to be sure, but the best are unusual, persuasive, seductive. And their success has something to do with the way they are taken for granted, casually watched. Few old things have flourished in the cultural chaos of this century, but docs have steadily consolidated their hold on a small portion of the contemporary consciousness. Film stars want to make or sponsor them. Sometimes, if you squint hard enough, they really do seem like the new rock'n'roll. I believe this is not only a direct result of the candid nature of documentaries and their ability to speak more profoundly than feature films about the times in which we live, the corruption and injustice that pervades society and the small, intimidate details and wondrous complexity of some of our more unique fellow humans. But also because, at a time where some of the most high budgeted films, crammed full of special effects and overpaid stars, leave us cold due to dire lack of compelling story, it is the documentary that grips us and ultimately provides us with compelling viewing and resounding meaning. Proof positive that audiences still hunger for story in its purest form. 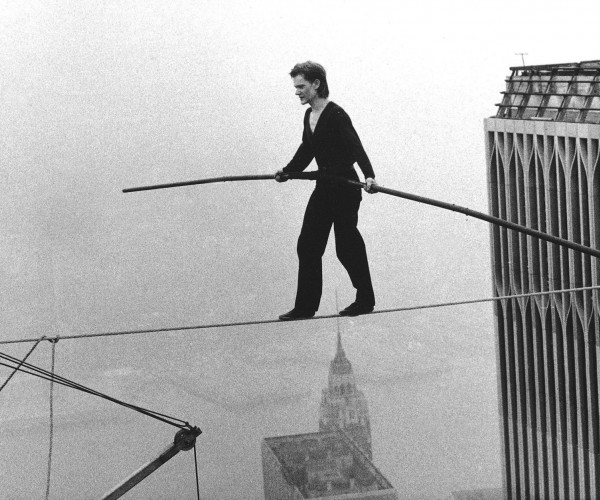 Using actual footage from the event seamlessly mingled with new re-enactments, filmmaker James Marsh masterfully recreates high-wire daredevil Philippe Petit's 1974 stunt: performing acrobatics on a thin wire strung between the Twin Towers of the World Trade Center. Plotting his feat like a master cat burglar, Petit enlists the help of a motley group of friends as he calculates every detail, from acquiring building access to stringing up the wire, and manages to pull off an astounding crime.